The basis for determining the social envy coefficient is respondents’ answers to the three statements presented in Tables 14.1, 14.2, and 14.3, which compare the responses from interviewees in each of the four countries.

Table 14.1 shows that although in all four countries at least a plurality of respondents supported the statement on increased taxes on the rich, the gap between those who agreed and disagreed in the United States is much smaller than that in Germany and France, which is probably related to the more skeptical attitudes toward taxation in the United States.

Increased taxes on the rich—Four-country analysis

“I think it would be fair to increase taxes substantially for millionaires, even if I would not benefit from it personally.”

Table 14.2 clearly shows that French and German respondents were more critical of high manager salaries and more in favor of redistribution than were interviewees in the United States and Great Britain.

Attitudes in all four countries toward managers’ salaries

“I would favor drastically reducing managers’ salaries and redistributing the money more evenly among their employees, even if that would mean that [the employees] would get only a few more dollars per month.”

It is perhaps no coincidence that the word “schadenfreude,” which has been so successfully adopted into English, has its origins in the German language: Germany is the only country in which the number of interviewees who agreed with the schadenfreude statement was (slightly) higher than those who disagreed, as shown in Table 14.3.

“When I hear about a millionaire who made a risky business decision and lost a lot of money because of it, I think it serves him right.” 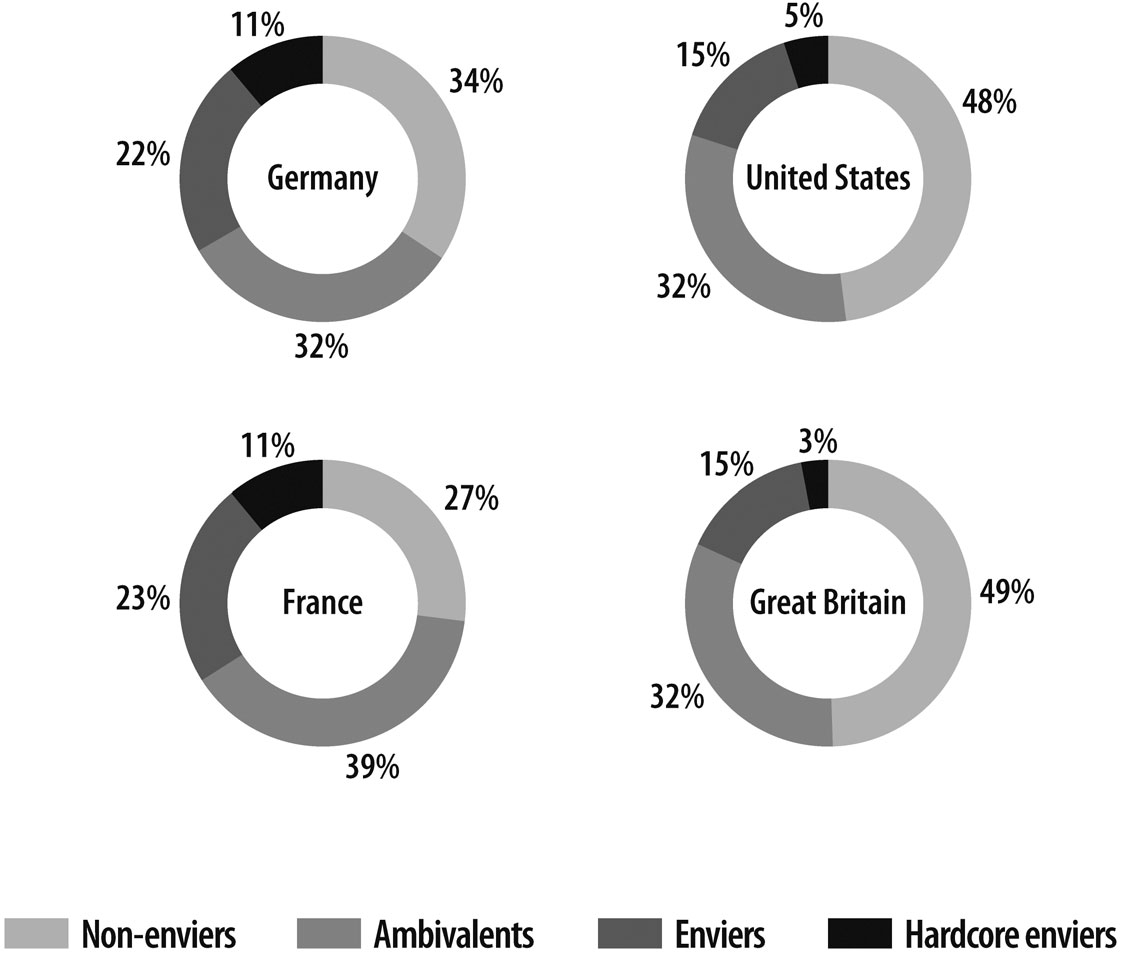 In each of the four countries, a correlation exists between whether an interviewee personally knows a millionaire and the interviewee’s opinions of the rich. In the two countries with low social envy coefficients, a far greater proportion of respondents reported personally knowing one or more millionaires—as either family members, friends, friends of friends, or social contacts—than in the countries with higher social envy coefficients. In the United States and Great Britain, where enviers were significantly less common, far more interviewees reported being personally acquainted with one or more millionaires than was the case in Germany and France, where enviers were more common (Figure 14.3).

“I personally know one or more millionaires.”

Note also that the relative proportion of millionaires in the total population is highest in the two countries with the lowest Social Envy Scale scores, namely, the United States and Great Britain, at 13.5 and 12.2 millionaires per thousand people, respectively (Table 14.4).

Millionaires and the general population—Four-country analysis

Unsurprisingly, these two countries have the largest percentages of interviewees who claim to personally know a millionaire.

secure and easy at: